neXt Curve attended the largest consumer electronics trade show on the planet with over 180,000 in attendance to identify the deeper technology and market trends that are driving the rapid evolution of our digital lives and are expressed in the new digitally-enabled consumer applications from smart home, 3D sound to emotionally-aware robots. 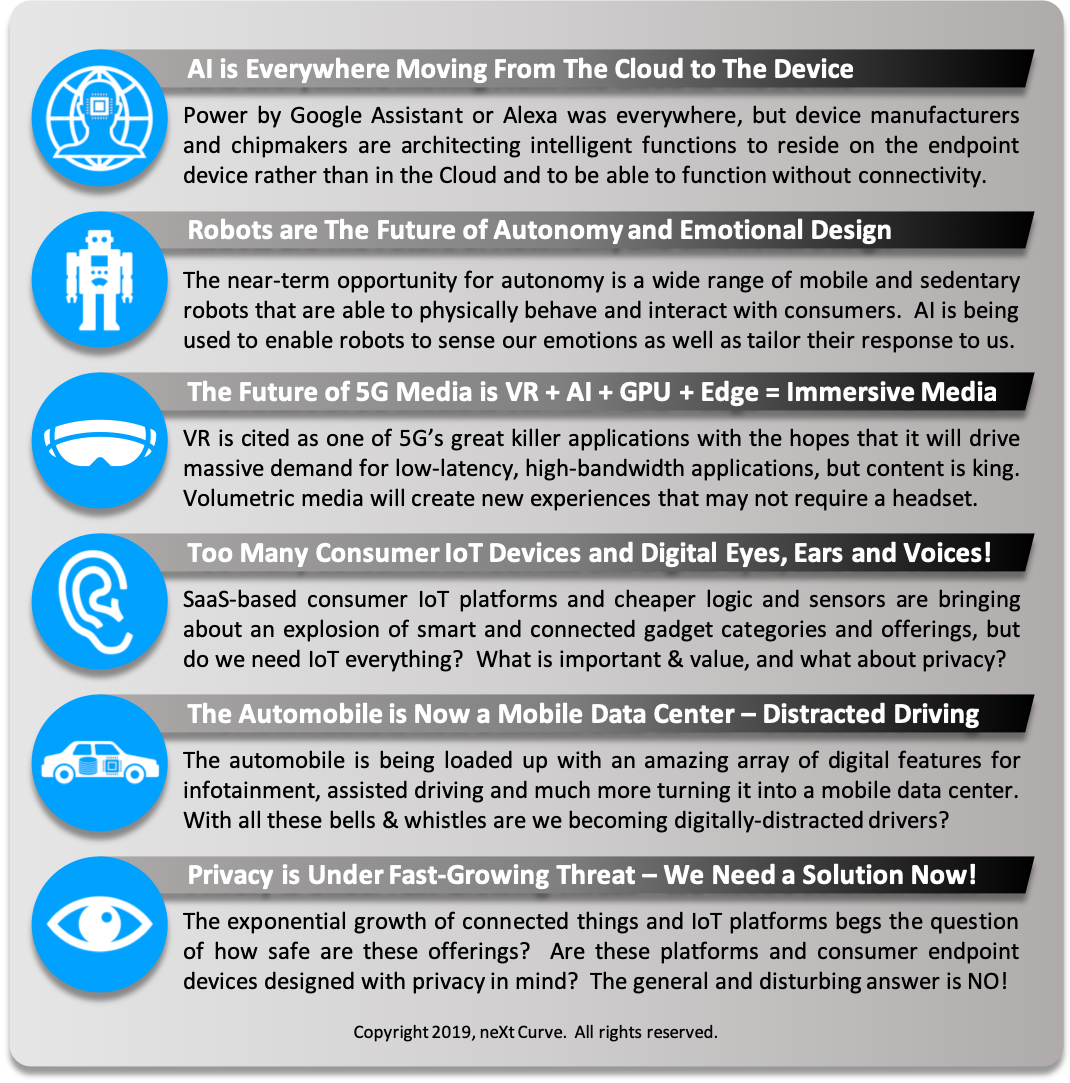 AI is Everywhere and Moving from The Cloud to The Device

2018 was a big year for the AI buzzword.  It seems that 2019 will be an even bigger year thanks to Amazon and Google, which have collectively popularized the idea of “AI as a Service” on the cloud.  As much as cloud-centric IoT AI platforms (it’s really just scripting) such as Alexa and Google Assistant have made aggressive moves on-boarding device makers onto their VPA-driven consumer IoT platforms, we noticed the continuing trend of AI functions moving into the endpoint device such as the Jibo digital companion, which was designed with intelligence implemented locally and personal data secured and managed locally on the device.

This trend toward on-device intelligence was further reinforced this year with Qualcomm incorporating an NPU (Neural Processing Unit) into their Snapdragon 855 chipset joining the ranks of Apple and Huawei.  With dedicated AI processors landing on device – starting with smartphones – we can expect that local AI applications and functions will follow that will be increasingly independent of cloud-based VPA and other AI-based services – autonomy.

Robots are The Future of Autonomy and Emotional Design

Whether you were Samsung, LG of Toyota, mobile robots were a must-have feature of your press event.  An increasing number of utility droids are incorporating many of the autonomous driving technologies we have become so familiar with such as LIDAR, proximity sensors, computer vision and autonomous smarts.  These technologies are making mobile robots safer to operating among people and more purposeful such as the growing number of delivery droids and mobile kiosks featured by some of the leading electronics and automotive players.

Robots are not only becoming more mobile and of functional utility, they are also becoming emotionally tuned into us as well.  Panasonic showcased emotion sensors that are able to use computer vision technology and machine learning to determine the state of attention and mood of a person.  The use case that they demonstrated was the detection of a person’s attention to the road while driving.  When the algorithm determined that the driver’s attention was straying due to drowsiness or distractions, the car would provide haptic or audio feedback to recover the driver’s attention.

The emotional connection between humans and machines is also being reflected in the device designs themselves and the way that they communicate.  A great example of emotional design is Tooru’s Liku autonomous robot, which is a self-learning doll very similar to the Sony Aibo learning digital companion that looks like a dog.  Liku not only exhibits familiar human-like behaviors but is able to make facial expressions that convey mood and attention – a notable evolution from the Jibo digital companion that we first encountered at CES last year.

What will be the 5G killer app?  For the past few years the hope that enhanced mobile broadband, ultra-reliable low latency and massive machine-to-machine communications will usher in a new era of telco prosperity has been firmly placed on the shoulder of the autonomous vehicle.  However, it seems that the future broadcasting of immersive media – more specifically, immersive media content – may drive the massive demand for data and compute that will fill and drive the promise of 5G.

Emerging volumetric media formats were demoed during the Pyeongchang Winter Olympics in the first commercial trial of 5G networks and new media technologies by Korea Telecom.  Volumetric media is generated by the real-time and simultaneous video capture from multiple points in an event venue.  The multiple video sources are stitched together using AI-enabled processes and algorithms to create a 3D, volumetric rendering of an event.  Event producers and editors are able to leverage this format to create new viewing experiences and replay coverage of an event such as a sporting event, a live play performance or concert.

Too Many Consumer IoT Devices and Digital Eyes, Ears and Voices!

There was an overwhelming number of consumer IoT devices and wearables that were showcased this year that integrated with either Alexa, Google Assistant and Apple’s HomeKit (hence Siri).  It is clear that Amazon’s push to make every consumer IoT device “powered by Alexa” is gaining significant traction.  We saw a broad range of new and established device makers engaged in their IoT ecosystem with Google Assistant making an equally ubiquitous showing.

A shake out of the consumer IoT and wearable landscape is inevitable given the large number of new products and device categories that filled the Sands Expo exhibition hall this year.  The consumer IoT market has a long tail with the fat end dominated by a small number of killer applications such as lighting, smart thermostats and security cameras.  Will we see the tail fatten this year or will most of these courageous consumer IoT endeavors struggle to find a market?  We suppose that the consumer will render their verdict this year.  One thing is certain, there is only so much room for smart things in our lives.  Only the high-value devices and applications will likely survive and find a critical mass market among consumers.

The Automobile is Now a Mobile Data Center – Distracted Driving

It is official, the automobile is now a data center on wheels.  Regardless of the SAE autonomous driving system rating of a car a tremendous amount of compute and networking is being incorporated into the car of the near-future.  A broad swath of semiconductor firms such as Qualcomm, Intel, NXP and Nvidia showcased examples of integrated smart car systems that enable an ever-expanding range of intelligent and data-intensive functions such as advanced infotainment that can manage media across multiple in-vehicle screens, expansive multi-media dashboards that include mobile commerce functionality, and real-time telematic monitoring and vehicle management via flashy digital instrumentation.

Security is of growing concern as digital automotive functions become increasingly network dependent and connected to remote service hosted in the Cloud making them more susceptible to cyberattack.  We know that cars can be hack as Jeep Cherokees were in 2015.  Much like a data center, the network within a car will need to be secured with firewalls, malware protection, device management, and access management and policy controls to foster the safety and privacy protection essential to the promise of the smart autonomous vehicle.

With all that computing power comes what seems to be an overwhelming amount of functionality and content that could distract driving as much as it is intended to improve the human activity and the experience.  Automotive startup, Byton, and numerous automotive component brands released digital dashboards that spanned the entire dashboard with potentially distracting content, digital instrumentation and controls.  We expect that the rules of “essential” and “simple” will begin to reduce the digital noise that is being introduced into vision of the smart vehicle of today.

Privacy is Under Fast-Growing Threat – We Need a Solution Now!

Apple was a passive but a notable exhibitor at CES 2019.  They famously plastered a massive building-side billboard that stated that, “What happens on your iPhone, stays on your iPhone.”  They made a very good point.  Privacy designs will become critical as our personal lives get invaded by a slew of connected, intelligent consumer IoT devices that are capturing information about us and how we live but have yet to gain or be deserving of our trust.

How and with whom are these devices sharing our personal data and information?  It is difficult to tell as these multitudes of devices plug into a wide array of home gateways, hubs, and cloud-based services that could expose and intentionally or unintentionally permit the exploitation of our personal data in ways that we are not aware of.  Unfortunately, there is no solution to address these increasing threats to our privacy.   The only hope at the moment are walled gardens offered by vendors and services providers that embrace a Privacy First mindset and values.

Digital technologies are driving constant change and you can see it and feel it at CES.  Some folks argue that this year was the same as last year.  Not really.  It depends on the lens or lenses that you apply to what you see there.  Buzzword technologies are converging quickly and the new applications they enable are being quickly tested by the market.  This is part of the change that we see at CES every year.  Business leaders should continue to tune into the nuances of change and recognize that digital technologies and electronics are impacting all industries in increasingly profound, game-changing ways.

Privacy will be the dominant influencer in 2019 as GDPR continues to settle in and companies begin to get a sense of the boundaries and implications of this regional privacy regulation that has global impact.  We noticed that there are many consumer IoT and wearables vendors bringing devices and services to the market that are privacy-ignorant.  Business leaders will need to reckon with the fact that we are entering a new era of privacy in a world where our private lives are increasingly monitored, analyzed and bartered.  Winning firms of this new era will likely be those that design their products and services to respect and protect our privacy.

For more insights, our picks for “tech that matters”from CES 2019 and neXt Curve’s predictions for 2020, check out neXt Curve‘s Podcast Channel and the replay of our webcast.

Contact us if you would like a detailed briefing of our analysis of the CES 2019 event and to find out more about neXt Curve‘s advisory services.