neXt Curve attended the IoT Solutions World Congress 2018 in Barcelona to uncover what is hot and what is the real state of the Internet of Things, Blockchain and A.I.  2018 was the year of test beds, experimentation and pilots.  We were curious to see what industries learned as they applied a rapidly-growing field of IoT technologies in discovering the use cases that matter.

Vendors are Looking for a Market for 7 Sigma with A.I.

This year, the Industrial Internet Consortium (IIC) added the A.I. Forum alongside the Blockchain Forum, which was introduced last year.  As we have seen over the last couple of years, artificial intelligence has been quickly elevated into the ionosphere of hype with 5G and IoT.  As A.I. has ascended so have the expectations and the fears of its impact on society, industry and humanity.

One thing is very clear, the technology is there. Companies have jump in with both feet experimenting with A.I. as we have seen at CES, Mobile World Congress and other industry/tech conferences that we have attended this year. With A.I.-based functions delivered as cloud services, the economics and accessibility to A.I. continue to improve drastically. You might say that A.I. is becoming consumerized or, dare we say, commoditized.

Based on our briefings with vendors, there are few buyers for the ever-expanding catalog of A.I.-enabled IoT solutions that promise to optimize operations and asset utilization.  The reason?  A.I.-based solutions require a high level of data maturity, which most companies do not have.  For end users it becomes a question of the ROI in pursuing and investing in 7 Sigma (0.019 DPMO)? It’s a difficult sell for IoT+A.I. vendors.

IoT Cloud Just Got Demoted!  The Future of IoT is The Edge

Many of the leading public cloud players made a very notable presence at IoT Solutions World Congress this year, but with an interesting twist. This year, they were pushing edge computing and their edge technologies prominently. With the 5G promise still a few years off, the idea of bouncing massive amounts of data to the cloud and back is not practical or feasible for most, if not all, IoT applications. It is clear that IoT will be a highly-distributed computing game, and the battleground will be The Edge. 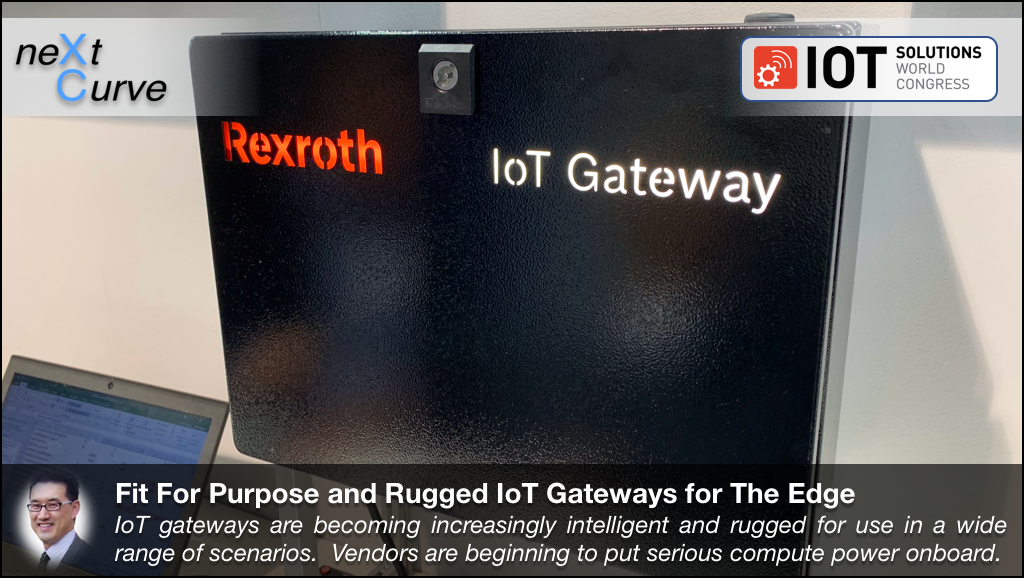 We also noticed a continuing evolution of intelligence in Edge devices with A.I. logic incorporated into a wide range of form factors from edge computing server appliances to gateways. As we saw at Mobile World Congress and Mobile World Congress Americas this year, Edge intelligence is going from micro controllers and light storage to compact, liquid-cooled servers with multi-core processors, terabytes of local SSD storage with A.I. coprocessors to boot. Moreover, distributed computing software and services (cloudlets) enable robust, real-time, streaming analytics and processing on these emerging breeds of Edge devices.

With all this intelligence and compute power at The Edge, what will be the role of the Cloud in IoT? This is a very good question, but data aggregation, consolidated analytics and centralized orchestration of endpoints does not feel leading-edge – no pun intended.

Is Fragmentation in IoT Tech Bad?  Middleware to Save the Day?

There is no question that the IoT landscape is highly fragmented with players and technologies at every level of the IoT stack vying for a dominant position.  Many IoT pundits will argue that the advancement of IoT will continue to be held back by lack of standards.  Enter EdgeX Foundry, a Linux Foundation project founded by Dell/EMC, which continues to mobilize a community of vendors and service providers to align with and promote the EdgeX Open IoT Platform. 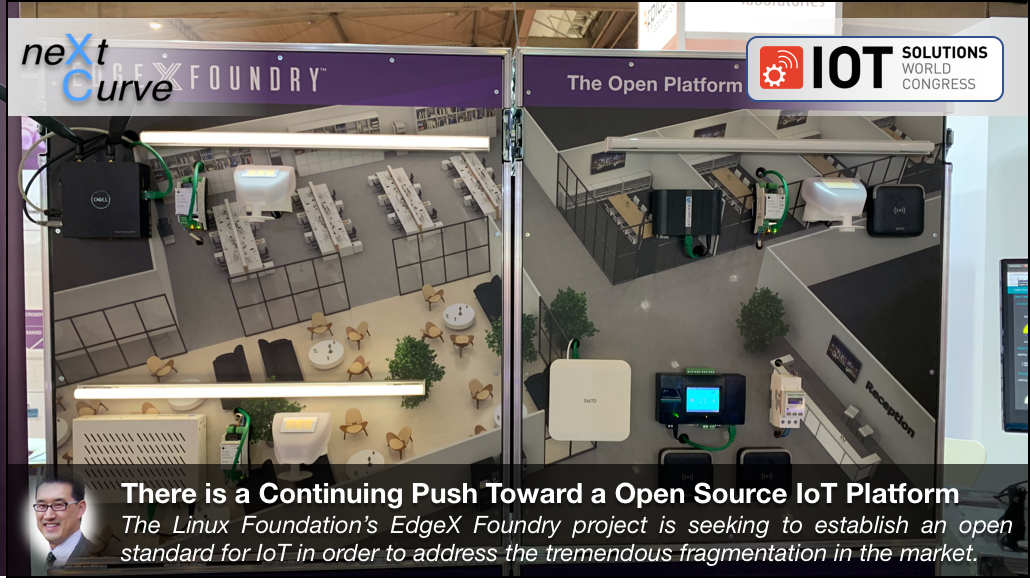 But fragmentation is nothing new.  The IT world is highly fragmented and though there are numerous open source programs, technologies and standards in place, they have not impacted innovation in an IT universe rife with proprietary technologies and ecosystems. How have we survived? Middleware. As proprietary and open IoT technology platforms move increasingly toward a SOA/API-oriented model, middleware should sufficiently tie us over as they have in the past as open source initiatives try to establish sanity in the IoT tech landscape.

The Massive Installed Base of Dumb Things is The Big Challenge

The most significant barrier to realizing the promise of A.I., Blockchain, Cloud-infused IoT is the massive portfolio of unconnected, dumb things that present big holes in the IoT solution fabric. This is the big problem that affects the viability of industrial IoT applications as well as consumer IoT applications.

Take Smart Cities for example. It is almost common knowledge that Smart City initiatives across the globe by in large have failed to get off the ground. There is no shortage of Hollywood-produced conceptual renderings of what a Smart City can be like, but most Smart City programs can barely get smart lighting funded much less implemented.

Based on our briefings with end users and vendors, the “digitalization” of these unconnected, dumb things is important in delivering the strategic value of what neXt Curve calls the first level of IoT business improvement enablement – visibility. Having digital visibility to the population of things and environments needed to enable and support an IoT application is the minimum requirement to progress to the next steps of IoT capability – insight through analytics, orchestration through cyberphysical controls, and optimization through closed-loop automation.

The vision and promise of prototypical killer IoT applications such as autonomous vehicles, the smart/connected home and the aforementioned Smart City depend not only on the new connected, intelligent, and sensing things that are introduced into your IoT environment, but the many non-digital assets and spaces that are needed to support the IoT use case. Besides, how will the promise and expected value of autonomous vehicles be realized if only 1 percent (currently there are nearly zero percent SAE level 4 or 5 vehicles on the road) are autonomous? Who is going to pay for the retrofitting of the billions of dumb, unconnected cars out on the road today needed to support the autonomous vehicle use case? You?

Blockchain and Crypto are Having a Crisis of Trust

Last year, the IIC opened the Blockchain Forum to much fanfare and excitement. The sessions were packed, standing-room-only events. Of course, this was just before Bitcoin made its meteoric rise toward $20,000/BTC in December of 2017. The buzz around Blockchain+IoT drew an army of entrepreneurs who used the event to pitch their ICOs and their promises of revolutionizing global supply chain, manufacturing, energy, media distribution, healthcare and DRM (digital rights management). 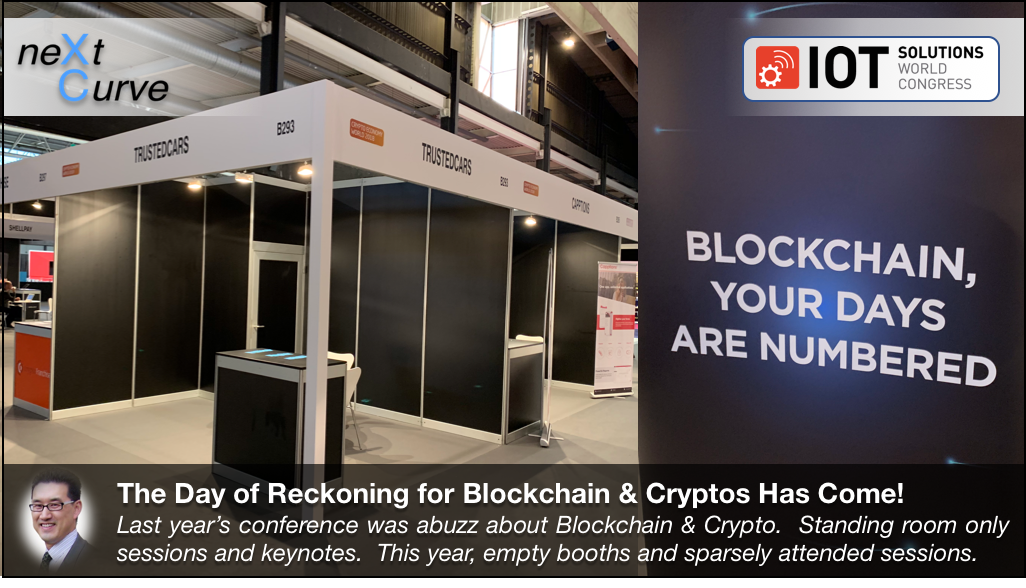 In less than a year the Blockchain and Crypto hype hit a wall and entered the phase of disinterest and despair. We encountered booths at IoTSWC 2018 that were unmanned and abandoned. The Blockchain end of the hall was very sparsely trafficked and populated with a hand full of vendors feeding on the pervasive Blockchain and Crypto betrayal of trust by offering “trust services” such as ICO auditing and what can only be described as a Snopes.com for Blockchain ventures.
Needless to say, 2018 has been a very rough year for Blockchain thanks to the massive capitulation of the cryptocurrency markets, but we believe there are great but less glamorous applications of the technology that will deliver new efficiencies and business value. It will take time as Blockchain is still a highly misunderstood technology that is yet to find its transformative opportunity and potential.
A victim of Crypto association, Blockchain will need to reconstitute trust, which is ironically what it was supposed to be good at. But trust requires security. Blockchain applications have proven to be neither secure or trustworthy. Immutable, yes. It will be up to the next generation of Blockchain innovators to create the applications and business models that will make a difference.

According to Orange, over 90 percent of factories do not pass basic security assessments. Security segmentation and segregation of IT networks from OT networks are common deficiencies across industrial environments. The world of Industrial Internet is far from secure and enterprises are in dire need of a holistic security solution in order to protect an expanding portfolio of IT and OT environments that are at risk from silicon to software.

The aforementioned fragmentation of the IoT technology landscape poses a challenge to vendors that are looking to secure their offerings as they continue to expand their interface with other technologies that are part of an IoT platform/architecture. However, IoT security continues to be fragmented with most solutions looking at specific layers of the IoT platform stack with few if any vendors offering integrated, holistic IoT security capabilities that cover endpoints, network, software, bare metal and silicon.

With the recent allegations by Bloomberg of compromised hardware and the advent of processor-level vulnerabilities such as Meltdown, Spectre and Foreshadow, CIOs and CTOs are challenged in dealing with the cybersecurity risks of today. Holistic security practices and capabilities will be needed to close the IoT security holes. It’s time for everyone to think differently about security.

Many of the hyped technologies are just that – hyped.  They are exciting at the moment, but vendors are struggling to find buyers of emerging IoT technologies such as AI, Blockchain, digital twins and others that are being promoted as the killer enablers of the killer IoT applications.

Business leaders should work with experienced, independent digital advisors to qualify the relevance of these emerging IoT technologies to their business and operations and consider their organization’s readiness to adopt and implement these technologies. None of these technologies work like magic and there is plenty of smoke and many mirrors out there.

Security remains a major IoT risk and concern. The IoT hype and expectations continue to far outpace the ability for the technologies, vendors and systems integrators to secure the applications that will deliver on the promises of industrial and consumer IoT use cases.

Security needs to be a business priority and the critical consideration of any IoT initiative planned or in play. Business leaders need to understand that cybersecurity threats are constantly changing and now target the entire IoT technology stack. CIOs, in particular, need to build teams that are competent in dealing with threats outside of their traditional IT comfort zones.

Finally, IoT vendors across the spectrum need to team with systems integrators and consultancies to position their technologies and offerings to the real buyer, the business, and address real, practical business problems.  Recognize that most companies are not ready to have A.I. solve their problems. A.I. analytics is the easy part. Data – not so easy. Very few companies are ready to pursue the 7 Sigma promise of A.I.

For more insights, our picks for “tech that matters” and neXt Curve’s predictions for 2019, check out neXt Curve‘s Podcast Channel and the replay of our webcast.

Contact us if you would like a detailed briefing of our analysis of the IoT Solutions World Congress 2018 event and to find out more about neXt Curve‘s advisory services.
Related Content & Media