IoT is still a widely confused topic for most businesses though the conversation has evolved a bit beyond sensors, connectivity and data.  We are starting to see practical business applications emerge from the world of Industrial IoT, which will likely provide the blueprint, platforms and solution patterns for consumer-facing IoT applications as well as Smart City, Smart Grid and Smart Transportation.

From October 3rd to the 5th of 2017, neXt Curve attended the IoT Solutions World Congress held in the beautiful city of Barcelona, Spain.  This conference, held in the Fira Barcelona convention center, was the third incarnation of the IoT Solutions World Congress event.  The official attendance has yet to be announced, but we estimate that about 10,000 were in attendance.  Some would-be attendees may have decided to cancel due to the protests stemming from the Spanish government’s crackdown on the referendum vote for Catalonian independence.

For those of you who frequent Mobile World Congress, the IoT event took up one hall, which is significantly fewer than the six or seven halls that will be occupied by 120,000+ exhibitors and attendees in late February of 2018.  The IoT Solutions World Congress itself is a fledgling conference that has promise depending on how the IoT conversation evolves over the next couple of years.  Maybe folks will realize that IoT has been around for a while in industries such as automotive, oil & gas, energy; and the discussion will become verticalized into smart industry topics as we evolve the IoT discourse from a technology oriented one to a business oriented one.

After a full schedule of IoT keynote speeches, sessions, labs and at least a hundred vendor interactions, we identified the following takeaways from our observations and copious notes. 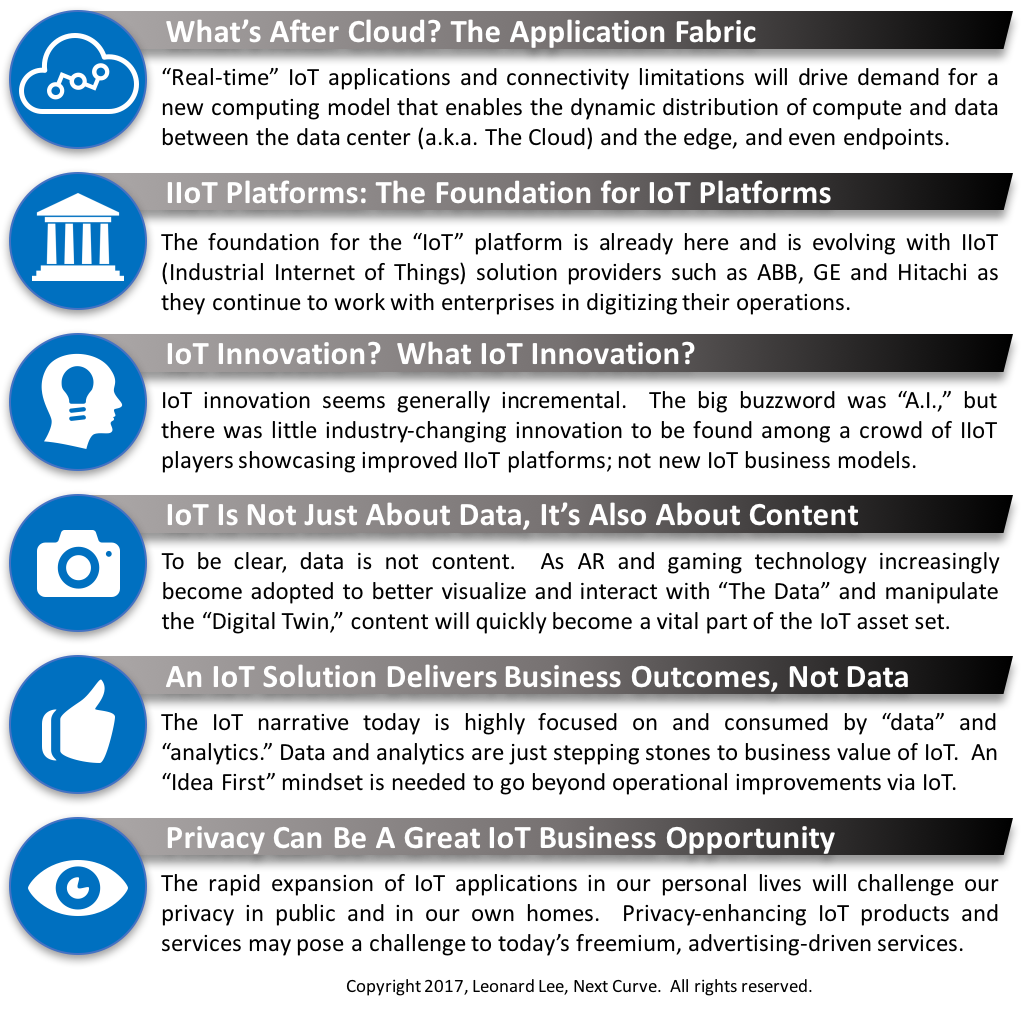 Despite all of the research and literature on the topic of the Internet of Things, it seems that things are just as confused as they were last year.  The clarity around IoT is, well, cloudy, much like cloud still is today for the most part.  Depending on the vendor, depending on the audience, the interpretation and perspectives on IoT differ quite a bit, even by admission of several of the keynote speakers and presenters.  We couldn’t agree with them more.  Our impression is that this year was about use cases test beds to demonstrate and prove the value of various IoT applications.  Maybe next year will be about value realization.

For business leaders, it is important to focus on the business value of IoT and not get confused by the semantic dissonance that is IoT.  This means stepping away from the techno-noise resonating in the IoT echo chamber and putting ideas first; ideas that drive innovation, not just improvement.  How far can you stretch your imagination and creativity in creating new customer and societal value?  Remember, the platforms and technologies are only the enablers, not the solution.

These are just the takeaways from the IoT World Congress.  We are happy to delve deeper into the six takeaways and provide insight into the supporting key findings and observations on an inquiry call.